Coltivarti Extra Virgin Olive Oil is a 100% Product of Italy and comes from certified Organic Farming from Italy.

Cooking with olive oil or using it as a simple salad dressing is something that our people have always done. Mine is a superb everyday olive oil which is a blend from the ogliarola and coratina varieties of olives typical from our area. It is balanced in flavour, with a body and peppery finish. The benefits from the olive oil have made it renown as the pillar of the Mediterranean diet. Our family and community have handed down the arts of olive growing and milling. We have just sealed these arts in a bottle.

We are proud to adhere to the European Organic Farming Regulation. Without the use of chemicals we guarantee a taste which is authentic and minimise the human impact on the environment.

This is a superior category olive oil, cold extracted, obtained directly from olives within 24 hours of harvesting and solely by mechanical means. It is coarsely filtered.

To best store the product please keep it in a dry cold place and away from direct light and heat. 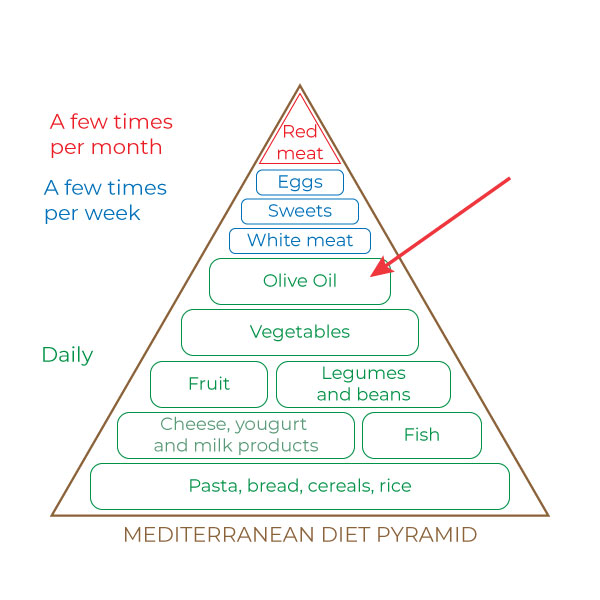 Is Olive Oil good for you? Still not sure about the benefits of Olive Oil? You will change your mind about healthy eating if you read through.

As a fact Olive Oil is the pillar of the Mediterranean diet.

The basics of the Mediterranean diet include:

-Moderate to high consumption of fish

Many studies all around the world have demonstrated that regular consumption of olive Oil is of great help to our health!

To mention only few findings from highly regarded scientific research sources, olive oil has been found responsible for:

Health benefits of olive oil are a fact today. Lets not miss the opportunity to improve our habits towards healthy eating.

The story of the olive tree

A bit of History of the olive tree

Olive production began in Italy in the VIII–VII century BC and gained considerable economic importance thanks to first the Phoenicians and later the Greeks.

Olive trees were planted in the entire Mediterranean basin under Roman rule.

From a geographical point of view, the prime area of Italian olive production is located between 30 and 45 °N, which in general is the geographical distribution of suitable areas for olive-tree production in the northern hemisphere.

In the Mediterranean area, Italy represents the central point of olive production because of its history, climate and environmental conditions.

This website uses cookies to improve your experience while you navigate through the website. Out of these cookies, the cookies that are categorized as necessary are stored on your browser as they are essential for the working of basic functionalities of the website. We also use third-party cookies that help us analyze and understand how you use this website. These cookies will be stored in your browser only with your consent. You also have the option to opt-out of these cookies. But opting out of some of these cookies may have an effect on your browsing experience.
Necessary Always Enabled
Necessary cookies are absolutely essential for the website to function properly. This category only includes cookies that ensures basic functionalities and security features of the website. These cookies do not store any personal information.
Non-necessary
Any cookies that may not be particularly necessary for the website to function and is used specifically to collect user personal data via analytics, ads, other embedded contents are termed as non-necessary cookies. It is mandatory to procure user consent prior to running these cookies on your website.
SAVE & ACCEPT